On Feb. 6th I left Houston TX to go on my first trip to Japan. I ended up Getting the trip on a whim, I was surfing the Web One day and Found  JAL was running Round trips from LA to Tokyo for only $615. That seemed really cheap. As it turned out though if I had just spent more time I could have gotten round trip from Houston for $750. Well what I did was plan A trip to La for the weekend before heading to Japan. I used to Live in LA a looong time ago. Also I was going to meet up with Vinh. I will sum up  the La trip Fairly quickly. Mainly I went shopping around town. Hit Hollywood, Venice Beach, Etc. Coolest part was meeting up with Vinh, talking Neo and the Hookup of some E3 stuff from last year. he showed me around his place and all the games he had. Some really neat and rare stuff, but he said he would talk about  it on his site later. Thanks again to Vinh for taking the time to meet up with me.

ok so Now it is Monday and my Plane leaves LAX at 11:40am. I got up early, packed up and headed out. Getting into the Airport was pretty easy  No long lines, boarding was fairly easy. So I am in the plane flying Economy. it was a little cramped especially when I was eating but all in all it was ok. I watched about every movie they had since it was a little difficult to sleep. If I recall the trip was around 13 hours. I arrived at Narrita Airport and got my bag and was ready to catch the Subway around 5pm. of Course it was now Tuesday.

My first Obstacle was getting to the Hotel. I picked up a travel guide from the 1/2 price bookstore in Houston which gave me the train and Subway routes. I figured I would take the subway since the station was near the hotel. Problem though when I got to the ticket machine the subway routes were all in Japanese. I thought they would have some instruction in English somewhere. now I was confused. However lucky for me a friendly Japanese native saw my confusion and explained how much money I need to put in and what buttons to press. Great Now I was ready. So I got my Subway ticket and then headed for the Subway. I got on board and was on my way. As I was traveling I started noticing the stops we were passing, after all I had a map of the routes but I did not recognize any of them. Did I get on the wrong Subway, How can that be there was only one leaving the airport. It was then I realized I had got on the Train instead of the Subway. Oh no, Well lucky for me the Train went to Ueno which is the area I was staying in but not to close to the hotel. So I got off the train and then headed out the gates. When I put my ticket in the gates closed and all sorts of alarms went off. I looked around confused to where I saw a Japanese man calling me over. He  looked at my ticket then at me. I pointed to my map and traced the route I wanted to take then traced the route (the train) I took. He seemed to understand. I then pulled out my map to the hotel and showed him where I was staying. I made a walking gesture with my fingers and he replied back 30min and then said "taxi". well I was trying to avoid taking a taxi so I started off on foot to the hotel. It was at this time I realized I did not know where the hell I was going ;) It was dark, I did not know if I was facing south or north, what a mess. So I went back to the train station to the taxi pickup and  called a taxi. I showed the taxi driver the map to the hotel and after looking at it he seemed to understand and took me to the hotel.

Great so I made it to the hotel Checked in and then stepped out to get something to eat. In walking around I found there were vending machines everywhere with everything in them you can imagine. Hot coffee in a can, Beer, food, movies, etc. well I found a shopping district and then a McDonalds. I went inside and pointed at what I wanted on the counter menu. The girl said something in Japanese and I just replied back "Coke" she said a bunch of other stuff in Japanese, and I put the money on the tray got my food and went upstairs to eat.  In throwing away my trash I noticed everything was recycled Paper, Plastic and drink. so I pored the ice down the drink shoot and separated out the paper and plastic. By this time it was late so I headed back to the hotel and went sleep. here are some pictures of the hotel room I stayed in. cost was ~$70 a night. Big thank you to Ghost Dog for pointing out the hotel and helping me with making a reservation. 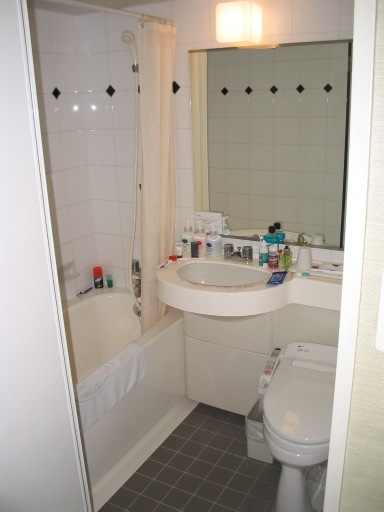 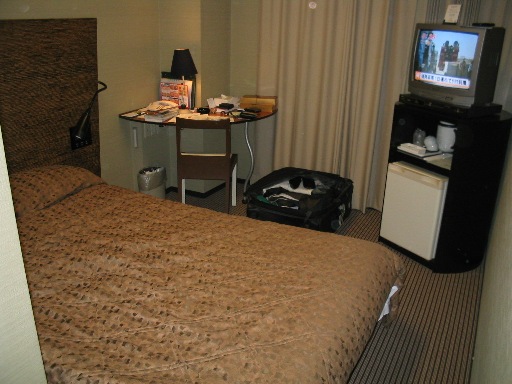